Desk Study and preliminary site work indicated that some areas of this former petrol station site were heavily contaminated with petrol and diesel. A soil vapour survey was subsequently undertaken to determine the extent of volatile contamination present.

Approximately 400 tonnes of contaminated soil was excavated and disposed of to landfill and three unknown badly corroded old cast iron petrol tanks were encountered adjacent to Watkin Lane. Petrol and diesel contaminated perched groundwater was pumped for temporary storage into 1m3 IBCs before being tankered off site and disposed of at a suitably licensed facility. The remedial excavation was subsequently backfilled with locally sourced reworked Boulder Clays following confirmatory testing.

Regulator sign off obtained following submission of the validation report. Remediation works were undertaken during Summer 2007. 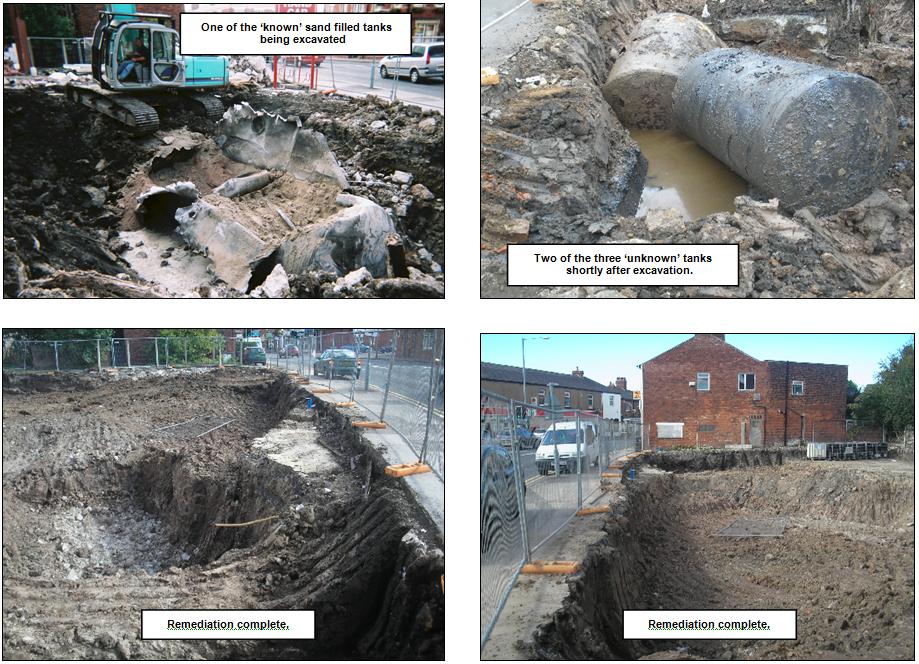 Previous and Current Land Usage: Cotton Mill (1880-1940), a soap and cleaning products factory (1950 to 1970) and construction chemicals and products manufacturing from 1970 to present day.

Proposed Development: Depending upon the results of the environmental site investigation works and potential estimated remediation costs the client would decide to either: sell the site for residential redevelopment purposes; or, remain and continue to improve the property for its current construction chemical/products manufacturing usage.

A detailed Phase I desk study and site walkover survey was initially undertaken which identified numerous potential sources of contamination on this complex industrial 2.5Ha site. Several mine shafts were also identified. Phase II site investigation works and associated chemical testing encountered large amounts of contamination over some areas of the site. When compared to published screening values, this contamination was considered to pose a risk to human health (current workers, post re-development workers/residential property occupants and to off-site residents); and, to a nearby watercourse. Gas and groundwater monitoring works were undertaken. Based on the results of the investigation and estimated remedial costs, the client decided to continue and improve the existing chemicals manufacturing facilities.

Subsequent groundwater modelling and more detailed risk assessment work indicated that offsite residents and the nearby watercourse were unlikely to be at risk from site borne contamination. Consequently, remediation works were not considered necessary.

A former garage with an underground leaking waste oil tank had resulted in the contamination of a large volume of soils and groundwater. Following a delineation exercise and completion of quantitative risk assessments for both human health and controlled waters, soils and groundwater remediation were undertaken to clean-up levels agreed with the Local Authority and Environment Agency, principally to reduce the risks to a nearby brook. The site has since been redeveloped for residential housing. 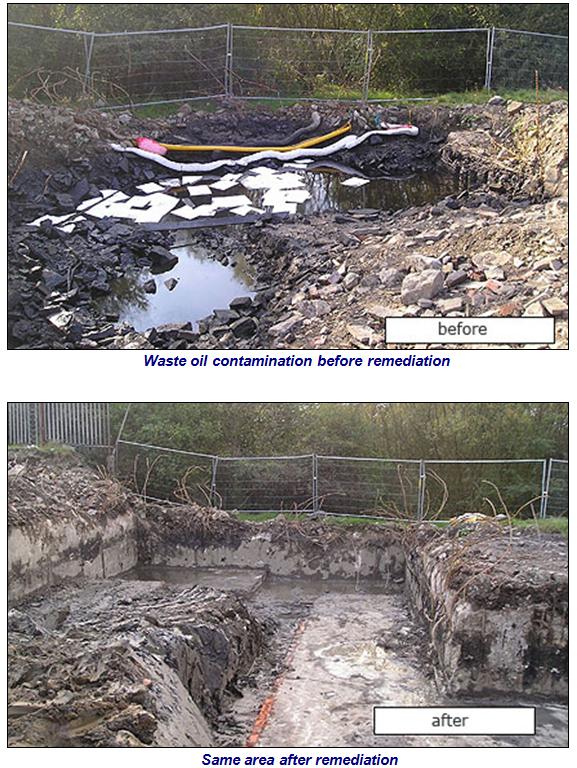 Desk study and Phase 2 site/ground investigation in Newcastle. Former paper mill site to be developed out for residential purposes. Phase 2 works proved that no remediation necessary.

Desk study and Phase 2 site/ground investigation in Leeds. Former tannery site located on the outskirts of Leeds. SIte to be developed out with offices. Phase 2 site investigation works proved significant risks to a nearby watercourse and end users of the site. Remedial works undertaken following completion of controlled waters and human health DQRA.

Phase 2 site investigation in Glasgow – a former foundry site to be developed out for residential purposes. A desk study undertaken by others had highlighted several potential significant pollutant linkages to a nearby river and end users of the site. Site investigation works indicated that only a capping layer was required in garden areas to protect end users for arsenic contamination in the ashy made ground. Gas monitoring indicated that a gas membrane should be incorporated into the floorslab design to protect end users from high concentration of carbon dioxide recorded.