Historical maps studied as part of the desk study indicated that the site had been previously developed out with a depot and that several tanks had been present. Possible areas of landfilling were identified relatively close to the site. Potential contamination receptors included end users of the site and a nearby watercourse.

The site investigation involved the formation of 10no. windowless sampling boreholes and 10no. machine excavated trial pits. Exploratory hole locations were targeted to areas of concern highlighted by the desk study; holes were also position for general site converage purposes. A number of boreholes were installed for gas and groundwater monitoring purposes. The soils recovered from the exploratory holes were logged to BS5930 (1999) Amendment 2 and samples were obtained and forwarded onto chemical and geotechnical testing laboratories.

Gas monitoring was undertaken at fortnightly intervals for carbon dioxide, methane, oxygen, hydrogen sulphide and carbon monoxide. Gas flows and pressure differentials were measured as was atmospheric pressure; a note was also made of the ground consitions.

Significant amounts of hydrocarbon type contamination were encountered over two areas of the site. Further works were advised to take place so that the risks that this contamination poses to controlled waters and human health could be fully understood – the further works enable the extent of the contamination to be ascertained and will enable a quantitative risk assessment to be completed; these works will hep determine the extent of remedial works which would need to be undertaken. No elevated concentrations of ground gas were recorded.

The geotechnical works indicated that the houses would need to be supported on shallow spread foundations, and that suspended floorslabs should be used. DS-1 concrete was advised.

TLC was commissioned to undertake a windowless sampling investigation over the Regent's Canal in city centre London in September 2013. The works were required to determine the soil structure at the base of the canal and to obtain samples of canal sediment for chemical analysis (total determinand concentrations and Waste Acceptance Criteria Leachability Testing).

The works were undertaken over the canal atop a small modular floating pontoon system. The floating pontoon system was provided by Floating Pontoon Solutions Ltd. The windowless sampling rig was positioned in the centre of the pontoon and the drill string was lowered down through the canal water and into the canal bed through a hole created by not inserting one of the floating modules. The launch site was several hundred metres away from the areas to be investigated. In order to reach the investigation locations (determined using a hand held GPS device), the pontoon was fitted with a small outboard motor. Permission to undertake the works was first obtained by TLC from the Canal Rivers Trust.

The site works were successfully completed in less than one day. Selected pictures which were taken during the course of the works are displayed below: 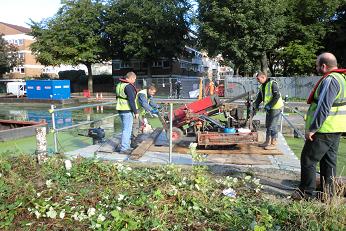 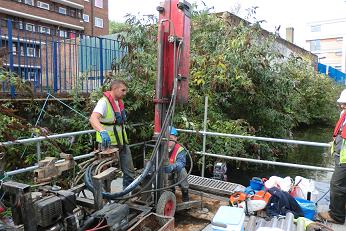 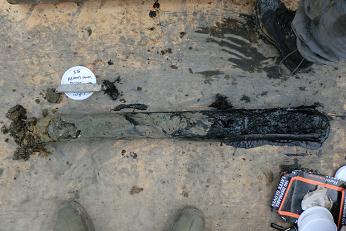 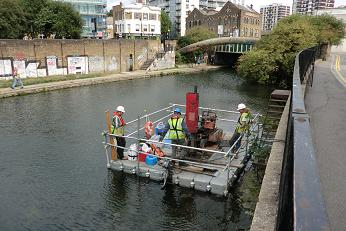 All contaminated land related works are undertaken in accordance with: