Building control had suspended construction works at this residential development site after the contractor had removed the toe of a steep slope to create the proposed development platform, and the slope had begun to fail.

Slope stability analysis indicated that a safe angle of repose for the slope could not be attained without the use of a retaining wall. Retaining wall design advice was provided by The Land Consultancy Limited.

The property has since been safely developed out. 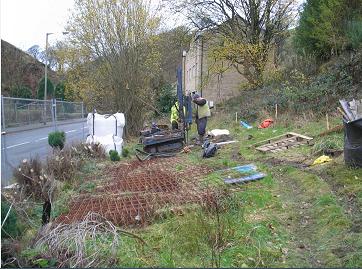 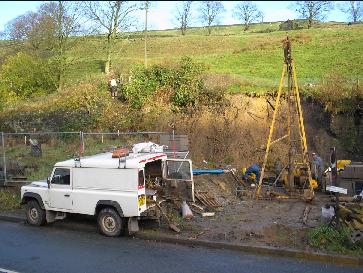 The Land Consultancy Limited was employed by a well known insurance company to determine the cause of subsidence which was affecting a office development in the London area which had been founded on London Clay. Several mature trees were located close to the office building.

The cause of the subsidence was investigated by excavating hand pits to expose the buildings existing foundations, and by advancing windowless sampling boreholes to depths of approximately 6m. Samples were taken for geotechnical testing including atterberg limit tests, suction tests and moisture content tests. Samples of tree roots encountered within the exploratory holes were taken for analysis.

The works indicated that the cause of the subsidence was likely to be desiccation of the London Clay by tree roots from the nearby trees. It was advised that the tree should be removed and that structural monitoring should take place to determine whether this remedied the situation. If the building continued to be affected by susidence it was advised that the buildings foundations should be underpinned down to a depth were no/very little dessiccation was recorded (>3.5m).

An extensive programme of cable tool percussion boring was undertaken on this site. Deep Made Ground (to 9m) overlying Glacial Till (to 15m) and Coal Measures Strata were encountered. Piled foundations were advised to support the proposed structures. As very little differential settlement of the floorslabs could be tolerated (high bay racking proposed) the floorslabs were also piled.